As we entered into 2018, we knew that God had blessed our year ahead more abundantly than we had ever dreamed. Cory & I started talking about how we could honor God and give back. And what better way to do that, than to give away a free wedding.

In February, we posted our Wedding Giveaway and couples started submitting their Love Stories like crazy. The number of couples who submitted their stories (daily) took us by surprise. After many hours of reading them, we sent our favorite three to 3 additional judges. The following day, they were to send us their votes. All 3 (plus ours) votes came in the same. All of our hearts were completely drawn to Steven & Jessie and the words she used to describe them. It was such true life. 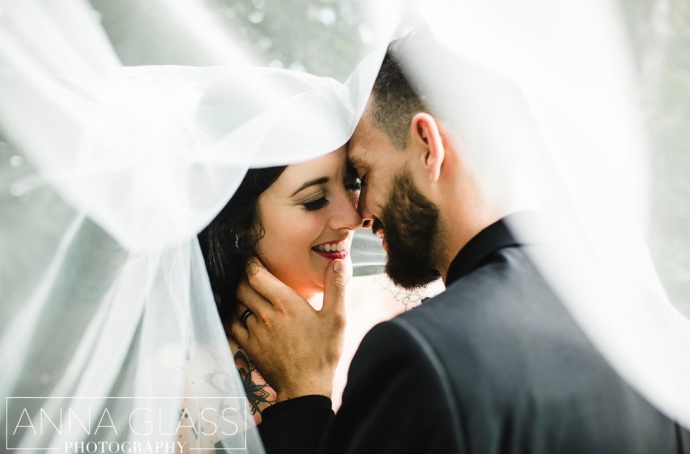 Here are the words that Jessie sent to us….

A little more than 2 years ago I met my soulmate. I remember the day I first looked into his eyes. “Don’t do that,” he said. “What?” “Don’t look in my eyes like that. I can just tell looking into your eyes is dangerous.” Seven months later he asked me to go out to the movies with him….and his three kids. Needless to say I was terrified, but something told me I needed to give him a chance.

Two years before I met Steven I made the heartbreaking decision to have a hysterectomy. My health was being compromised, and although I had always wanted children, I came to terms with the fact that they just weren’t meant for me. Despite the fact that I had removed children from my future plans several years before, from that first night with Steven and the kids I felt like I belonged. You see, these kids’ mother had walked out on them, and they were still deep in the process of repairing their lives and their hearts. We didn’t understand at the time, but they were exactly what I had always wanted and I was exactly what they needed. That same night Steven snuck a kiss in the movie theater as we sat squished between three snoring children. Telling the story of that date to a mutual friend of ours, he said “that sounds like your last first kiss to me.” He couldn’t have been more right.

Unfortunately, at the time we started dating I was living in Georgia and Steven was living in Tennessee. For almost a year and a half, I drove across state lines and time zones every Friday and Sunday just to spend a mere 48 hours a week with my new family. Leaving each week was tough at first but soon it became unbearable. So many nights were spent on the phone, sending videos back and forth, and planning for a future that we couldn’t quite fathom yet.

We finally got our chance last October when a position became available in McEwen and I got the job! I packed up and moved in just two weeks time, and we’ve been blessed to have spent the last several months all together…finally. Now that we are settled, it’s time to officially say “forever”, but it’s not quite as simple as it seems. With three kids, our full time jobs, and me finishing up a degree on the side, it’s hard to find time and money for date night much less a wedding.

I am blessed beyond measure to have found my other half, not only in this wonderful man but also these precious children. Our love story isn’t just about us. It never has been. Our love story is all about how we became a family in our hearts. Now we just need the paper. I truly never realized how much I was missing until I found them. I feel like we knew from day one that we were going to spend the rest of our lives together. Even our vows were written almost a year ago!

We would love the opportunity to have our wedding at such a beautiful venue, and especially one so close to home. We have family and friends all over Tennessee that are anxiously awaiting our announcement of a wedding date. I can’t think of a better way to start our lives together than with a beautiful and elegant wedding at Firefly Lane! 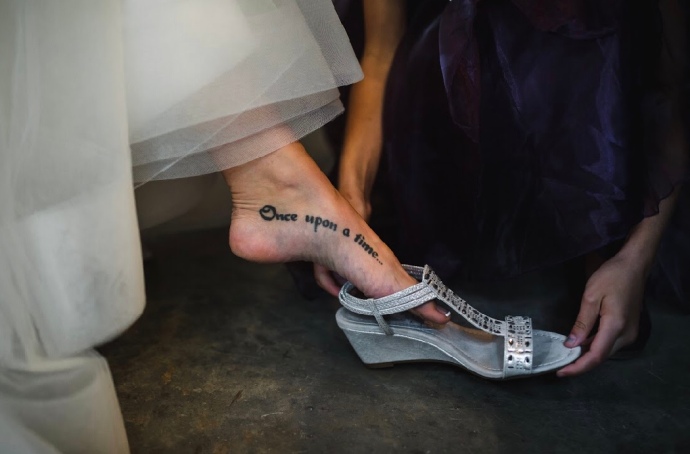 Fast forward 6 months and now we have arrived to wedding day. My goodness, how her tattoo says so much. As she slid her feet into her shoes and prepared to walk down the aisle toward Steven, I was at a loss for words.

I still am, even as I write this. Their day was a fairy tale.

One of couples favorite parts about The Barn at Firefly Lane, is the covered bridge. It is such a statement piece as it holds wedding gowns and gorgeous couples. Jessie was absolutely stunning in her dress and, well… he was so handsome in full black.

Their ceremony took place in our garden that had just been renovated a few months prior and Nature’s Design Flower Shop nailed it with their floral design! The arch and barrels were beautiful and I love the deep purple thrown in. 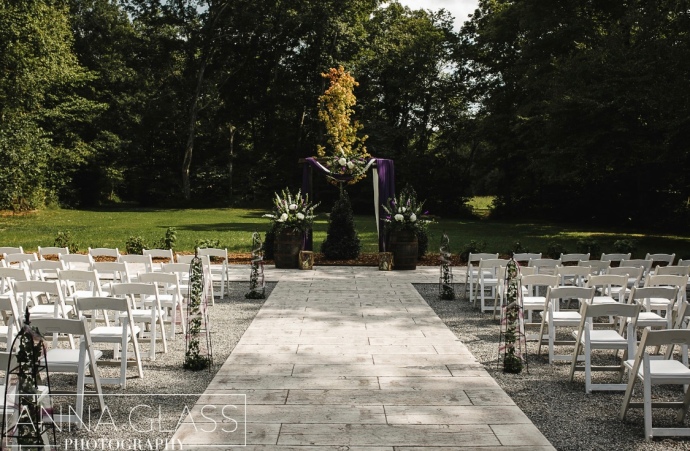 Steven & Jessie chose not to see each other before the Barn doors opened. They did have a moment, on the side of the Barn by the brides suite, where they held hands between the door. As he walked back into the Barn after their moment together, he was in tears. And I’ll never forget it…. He said to me, “I just Love that woman so much.” I pretty much had a heart explosion. 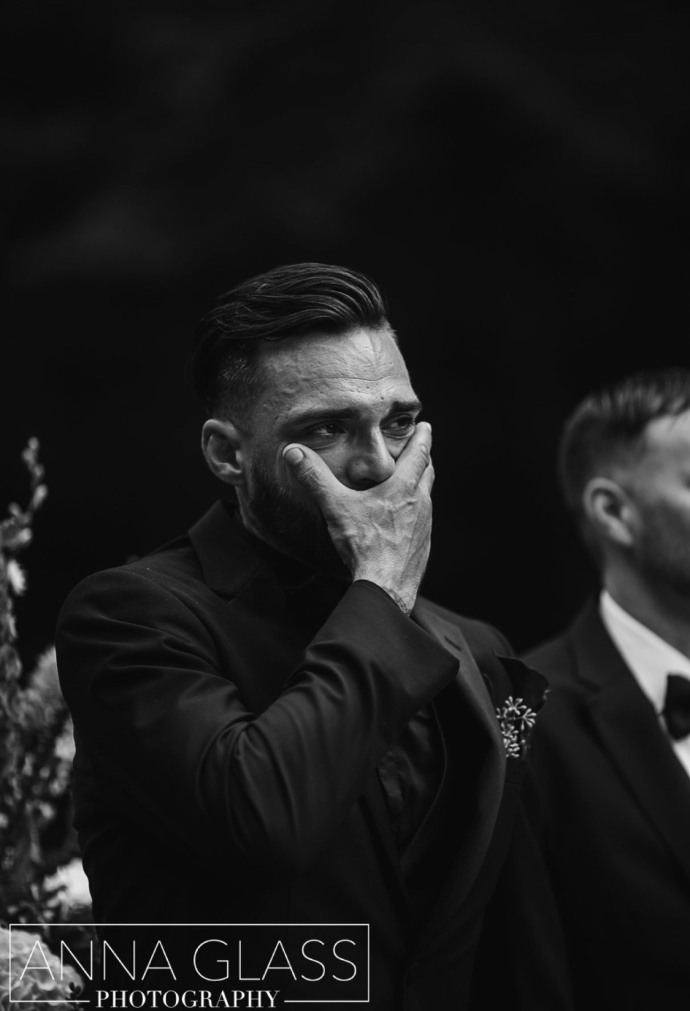 After reading their vows to one another and saying “I Do”, we watched the EPIC first kiss. I mean, seriously, I have no words other than epic. 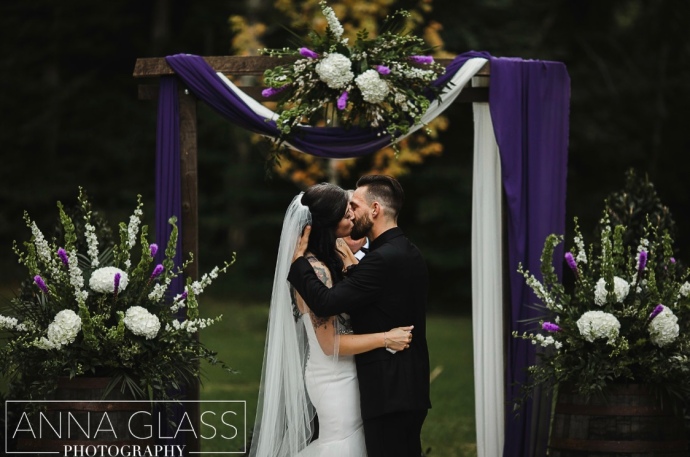 Anna Glass Photography is so talented! She has such an eye for capturing moments and giving them the perfect edit. When Anna heard that we were giving away a wedding, she reached out and told us she wanted to give away her photography as well! We were so excited! During the ceremony, every time I was crying and looked over at her, she was crying right along with me. I couldn’t have asked for a better person to capture this day! 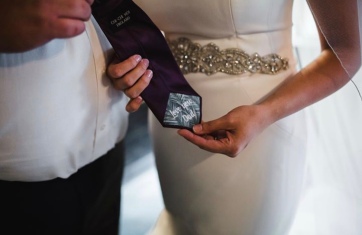 Every detail was captured beautifully! I love that Anna placed their rings on a moss covered tree and that Jessie got a picture with her dad, wearing his gift. His monogrammed tie was perfect. What a sweet idea for him to have forever. 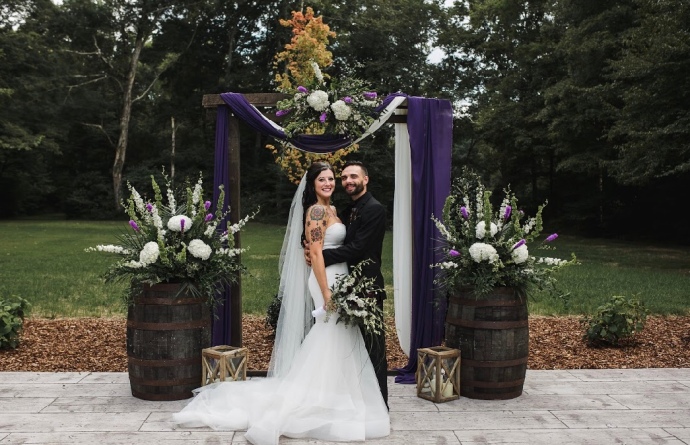 It was truly such a gift to us and an absolute honor to be able to celebrate this day! After a beautiful summer day, Jessie changed into her second gown (deep purple of course) and they exited the barn through a line of sparklers. Then they hoped on his motorcycle and headed off into the night. 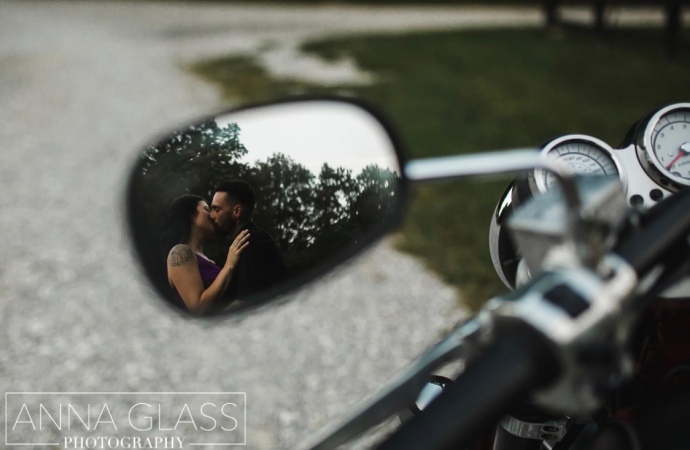 A huge thank you, to Steven & Jessie, for having the courage to share your story and then being willing to let us be part of it all! We wish you two the absolute best as you and your family grow old together! We pray that God will do mighty things through you and your family!

A huge thank you to Anna Glass Photography and Jenny Williams at Cotton Jenny Salon for giving their services to them for free. Best Gift Ever.